Back in September, I attended the Economy, People & Planet conference at the Copenhagen Business School. It was an intense experience with lots of good people, interesting talks and workshops. The talk that I enjoyed the most was CBS professor Ole Bjerg who talked about The Inconvenient Truth of the Post-Growth Economy

He started out with the image of the Earth seen from space that we greens often show to express that we’re all in it together on this Spaceship Earth. But his point was that there are four errors with that image:

1) The Earth is round
Seeing the Earth from space doesn’t match with the perspective of life on Earth that we experience everyday. Nothing in our day-to-day activities give us that sense of connection to something as huge as the entire planet. There’s no direct feedback.

2) There are no people
Seeing such images of the whole planet is an ecologist’s dream: It’s a whole system without any visible interference. For the uninitiated, seeing such an image will make them feel unwelcome. The indirect conclusion being that they – people – are the problem. That without any people on it, the planet would be in balance. That the planet would be better off without us.

3) There are no borders
You can’t see borders and countries from space, yet they are very much there. We can’t ignore them. No matter how much we want it, there is no global “we”. It is an abstract and unreal ideal. Simply because we don’t all feel that we’re in it together. Very few refugees and migrants are welcomed across borders. Zooming out doesn’t make them go away.

4) Who’s looking at this image?
This is not a human perspective. Sure, it might be an astronaut. But it will a tiny minority of the Earth’s population who will have the opportunity to see the Earth from space. So maybe it’s God? Maybe it’s a postcard from God? If so, it merely takes our agency. It just shows that we’re out of our league. And what is God doing? Either he sent the postcard because he’s left us behind. Or maybe he can’t help us. Or maybe he just likes to watch…

For someone like me who have been known to use the image of Earth seen from space as a macroscope to show how we’re interconnected and interdependent, Bjerg’s points are both provocative and insightful. It is very much true that zooming out like this makes us lose our human everyday perspective of the people and politics that our lives consist of. The image asks us to leave that behind for a bigger, more abstract cause. The planet itself.

And having thought about this, I tend to agree. As Wendell Berry says, “it all turns on affection.” It won’t be appreciation that saves us, it will be affection. Affection to specific places. To specific people. To specific needs.

And that leads to Ole Bjerg’s conclusion. Instead of focusing on the image of the planet as a whole, we should focus on this instead: 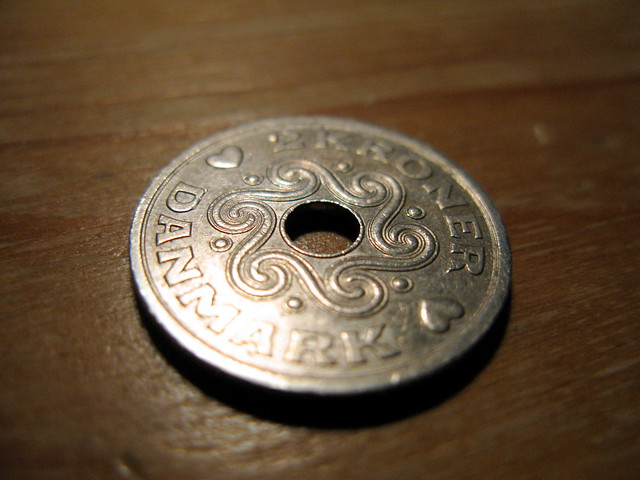 Bjerg offered a few examples, including local money and full reserve banking. He is working with the initiative Gode Penge – a Danish equivalent to the British think tank Positive Money that lobbies for money reform as a way to create not only a more sustainable economy, but also a more sustainable planet.

I encourage you to check it out if you’re not already familiar with it. I think you’ll be surprised by what you’ll find …