I left Jordan. From Eilat I got on an express bus for Haifa in northern Israel. A six-hour cross-country journey. 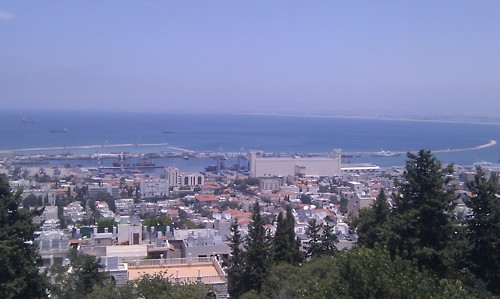 This is Haifa. Israel’s third-biggest city, its biggest port, and home to a ridiculously big grain silo (the big grey building on the harbour). Apparently, this silo contains enough grain to keep all of Israel supplied for a full year in case the country is cut off from the rest of the world. It is a good example of the somewhat paranoid mindset that characterizes Israeli public policy. (though, as they say: just because you’re paranoid doesn’t mean that people aren’t out to get you) 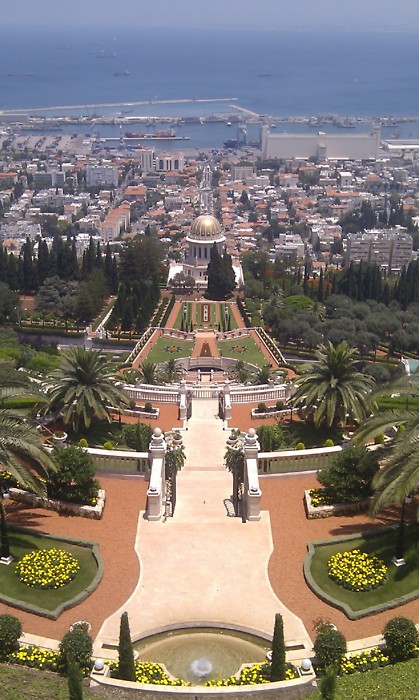 This is also Haifa. Home to the Baha’i gardens and the shrine of the Bab – a holy site for the Baha’i faith which around 5 million faithful around the world.

The gardens, which consist of 18 terraces – 9 below and 9 above the shrine – on the side of Mt Carmel, are meticulously trimmed and watered by 700 believers. The grass is of golf green quality. Everything is just right. And though the perfect symmetry of the gardens look nice at a distance, up close it’s kind of boring.

Instead of the Baha’i gardens, I found the nearby Ursula Malbin sculpture garden to be much more to my liking: not as tidy, but with much more life and character – especially through lovely and poetic sculptures such as this 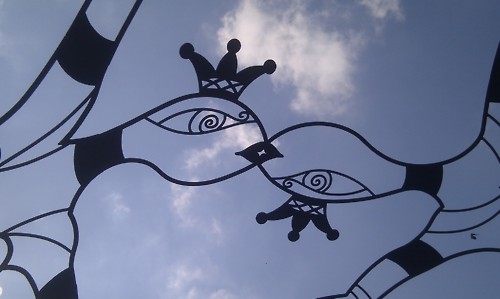 I also liked this sculpted gate that I came across in the German Colony district of Haifa: it consists of two figures bending over, meeting in a kiss. I love the effect of looking up at the sculpture and into the blue sky above at the same time.