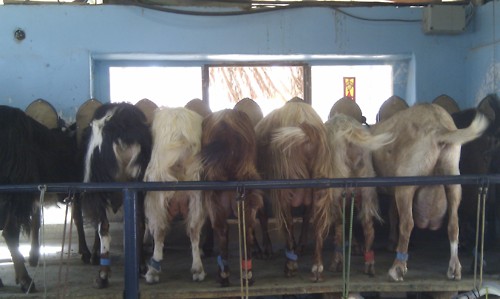 A while back, I promised to tell a bit more about my work at the goat yard here at Ne’ot Semadar.

So this is what it looks like at the milking area of the Dir, which is the Hebrew word for goat yard.

The goats come into the milking area, stick their head into the trough, and activate a lock mechanism that prevents them from leaving until we’ve had time to milk them. So they’re stuck with their heads in the feed and their butts facing the world.

I get to look at a lot of goat butts these days, as I’m quite a few shifts milking and feeding the goats. 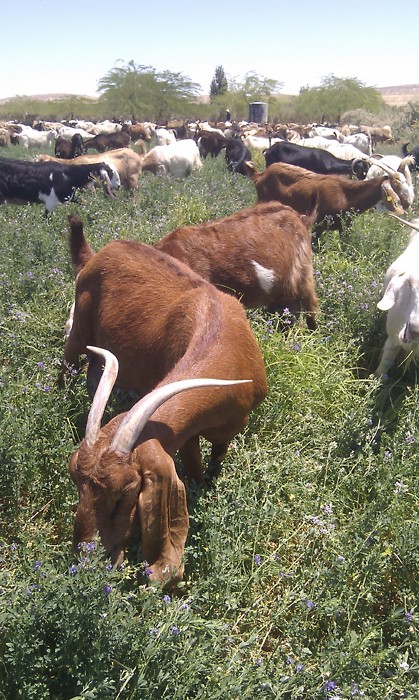 The grown female goats are milked in the morning from around 5.45 and in the evening from around 16.30. Each goat produces around 2.5 litres of milk a day on average, so the daily total is around 600 litres.

All of that milk is taken to the local dairy to be turned into yoghurt, lassi, various kinds of cheeses and ice cream. Some is also just skimmed for use in the coffee or the kids’ cereal. 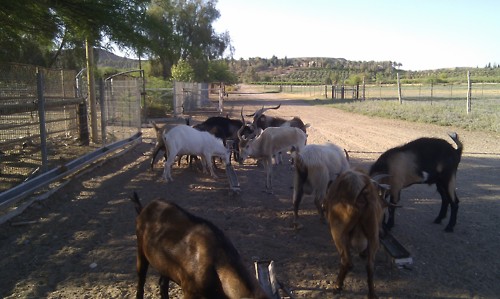 One of the best things about working with the goats is taking them out to pasture. Here the young female goats, the nigmalot, are grazing quietly around 7.30 am. And while they eat, you get to sit and contemplate, enjoying the morning as much as they do. 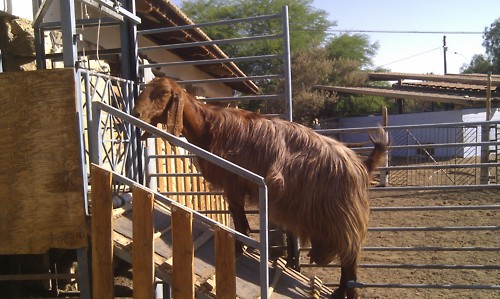 Some of the goats have more personality than others. And this one is especially outgoing. This is Nerchama (the ch is pronounced as in German like a throat clearing noise, not as the “ch” in “chair.”). It is a Hebrew name that means “consolation” or “comfort”.

Nerchama is one of the biggest, and thus one of the hungriest goats in the herd. This means that she will come back into the milking area when other goats are coming out to have seconds. On this photo she is in her favourite pose: Waiting for the gate to the milking area to open so that she can run in and snatch a few leftovers.

She is quite strong, and usually the best tactic for getting her out of the milking area is to pull her by the ears, which, as you can see, are already quite long. 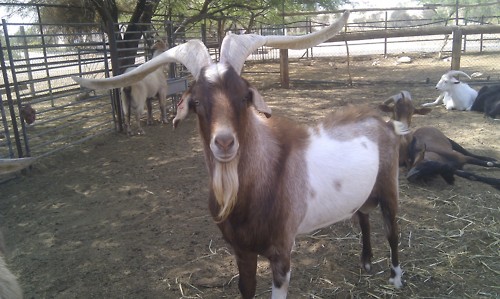 There are ten male goats that are kept separate from the rest of the herd, and for good reason. They only have one thing on their mind. Having seen male goats up close I understand fully why the devil is commonly depicted as half-goat half-man.

With their big horns, their long beards and their eyes with weird elongated pupils they look decidedly other-worldly up close. They are like the incarnation of the archetypical male features: They swagger, they butt horns and fight, they exude a heavy, sweet musk. In short, they are the incarnation of the desire to procreate. Some of them even come up and rub themselves against against us when we take them out to pasture.

As Isaac, who is one of the people in charge of the goat yard, says, the males are hot right now. And the time is close: Within a couple of weeks, they will start the mating.

Another interesting character of the goat yard is the goose. It follows the herd around everywhere. To the point where popular imagination has it that it is goose that thinks it is a goat. Here it is seen drinking from the goats’ water trough: 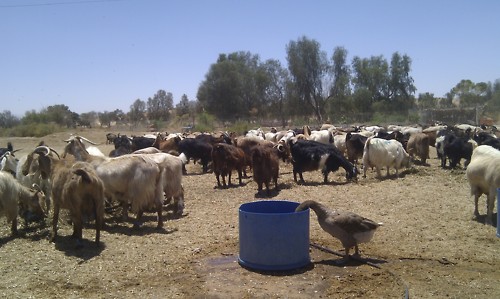 Story has it that there used to be two geese, and they would always make violent racket in the yard, annoying everybody who worked there. One day, one of the geese disappeared. Only a few days later was it discovered that it had – literally – fallen into a ditch and died. It was a hole dug for some irrigation piping, and it had been unable to climb up. The goat yard volunteers, rather cynically, rejoiced.

Yet another strange resident around the goat yard is this desert antilope. The kibbutzniks found it years ago lying injured close to the kibbutz, and they brought it in and took care of it. And it has been part of the herd ever since.

The goats mostly ignore it, and it just sort of does its own thing most of the time. But it is often around when there’s food to be had. Here it is joining in while the male goats are eating.

One annoyance that comes with the territory in the Dir is the flies. The combination of warm goatshit and lots of fresh milk attracts a lot of flies. Apparently, they also like the warmth of the electrical kettle: 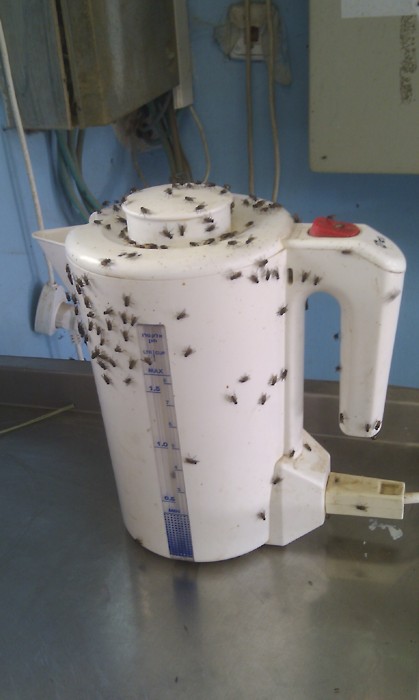 1 thought on “Herding goats (and other animals)”