After 6 months of fieldwork from April to November 2006, I sat down to write my Master’s Thesis on the social dynamics of the Ubuntu Linux developers’ on-line community. I turned in the thesis on the 23rd of June 2007, and defended it successfully on Monday the 27th of August 2007. After some tweaking and polishing, the thesis now available for a wider audience.

Download the thesis in A4-format (3 MB PDF) with generous line spacing (a requirement of the university) or in A5-format (1.5 MB PDF) in a more compact format. Or, you can scroll down to read the abstract. 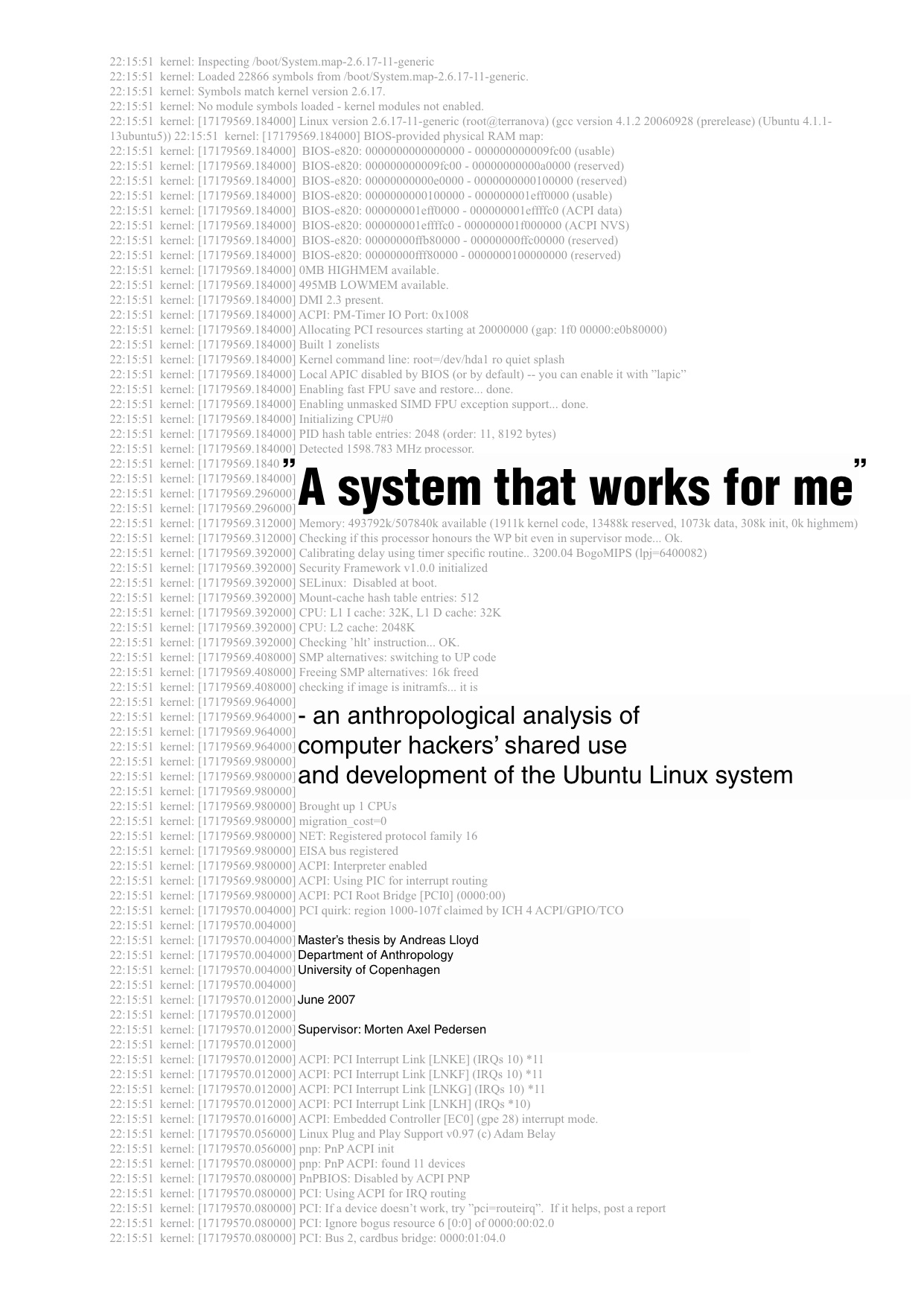 Based on more than 2 years of daily use of the Ubuntu Linux system and 6 months of on-line and in-person fieldwork among the developers working to develop and maintain it, this thesis examines the individual and collaborative day-to-day practices of these developers as they relate to the computer operating system that is the result of their labour. Despite being spread across the industrialized world, these Ubuntu hackers socialise, share their knowledge, and come to depend on each other in their work across the Internet, as well as in their in-person meetings at conferences and summits.

I argue that these shared and negotiated on-line and in-person practices constitute a community of practice (Wenger 1998) rooted in a more than 40-year old ‘oral’ computing tradition based on the Unix operating system which has spawned a lively interdependent on-line eco-system of free software projects built on the reciprocal sharing of knowledge and source code which, guaranteed by cleverly crafted copyright licenses, has resulted in a cumulatively improved system developed openly on-line in a fashion which has made it a viable alternative to the mainstream IT industry.

Taking the Ubuntu system as my point of departure, I examine the network of practices, processes and actors in which it has been constructed. Through a strategically selected constellation of theories, I seek to describe and analyze the three central dimensions of a community of practice: Joint enterprise, mutual engagement and shared repertoire.

Joint enterprise is the Ubuntu hackers’ negotiation of their different personal motivations for contributing to this cause in relation to the community’s overall, institutionally stated goal of spreading the use and awareness of free software. Following Alfred Gell’s work on social relations mediated through technical work (Gell 1999), I argue that these diverse interests are reflected in every little part of the system and results in conflicts and social negotiations centred around the fascination of learning the details of technology, enjoying working together on a technical challenge, and sharing an ethical commitment to write software that can be shared and understood for others to use and learn.

Mutual engagement is the complementary social practices through which the Ubuntu hackers work to develop and maintain the system. I argue that these practices contain a duality between what Claude Lévi-Strauss has called engineer work and bricolage (Lévi-Strauss 1994): Between visualising and designing new features as well as redesigning and reimplementing odd bits of left-behind work to fit their needs through a haphazard extending, fixing, fussing and testing. I argue that this mutual engagement enables them to learn from one another by collaborating, discussing, sharing their work, and helping each other both on-line and in-person.

Shared repertoire consists of the experiences, stories, tools, and slang through which the Ubuntu hackers come to share through their daily use and customization of the Ubuntu system – the shared built environment which they adopt as their own. I argue that this taking up residence within the Ubuntu system is similar to Tim Ingold’s notion of dwelling (Ingold 2000), and that the system affords the hackers’ work to such an extent that it becomes an extension of the hacker’s mind, as suggested by Clark & Chalmers (1998) – the all-encompassing means for achieving their individually diverse goals.

Furthermore, I claim that this community of practice is built not only through the hackers’ shared history of learning to dwell and build within Ubuntu system, making it their own, but also through coming to trust and collaborate with the hundreds of developers and millions of users dwelling there in dependence on its continued, guaranteed development and integrity. I argue that this continuous building of the system, in what Matt Elliott calls a stigmergic fashion (Elliott 2006), which empowers the hackers to change the system freely, communicating directly through the changes they make to their shared environment. This stigmergic collaboration rests on the cultivation of a mutual accountability that is built in part on a reciprocal trust based on the hackers’ personal on-line reputations verified through technical and cryptographic means central to membership of the community of practice. As well as in the reciprocal governance of the respected and well-reputed hackers leading the project in a manner similar to the rule of Melanesian big-men as described by Marshall Sahlins.

Finally, I suggest that it is the possibility to adopt, learn, configure, and even build the system according to their own needs, which opens the meritocratic community of practice for new contributors to scale the steep curve of learning necessary to enter and learn among them. In this way, the Ubuntu hackers come to share more than just the same system, they come to share a common history, and, to a certain extent, a shared identity through their practice.