Permaculture sprung from a diverse set of influences such as ecology, systems thinking, local horticultural practices and ethnobotany (as permaculturist Elaine Solowey puts it, “Permaculture is a modern, codified system of traditional knowledge”).

So when we begin talking about what organisational permaculture might be, there is a similar set of influences to draw upon. Even though they do not use the term permaculture, a lot of people have thought and written about organisations as whole, living systems that can be designed but not controlled.

Here, in no particular order, is a list of the ones that I’ve come across so far: 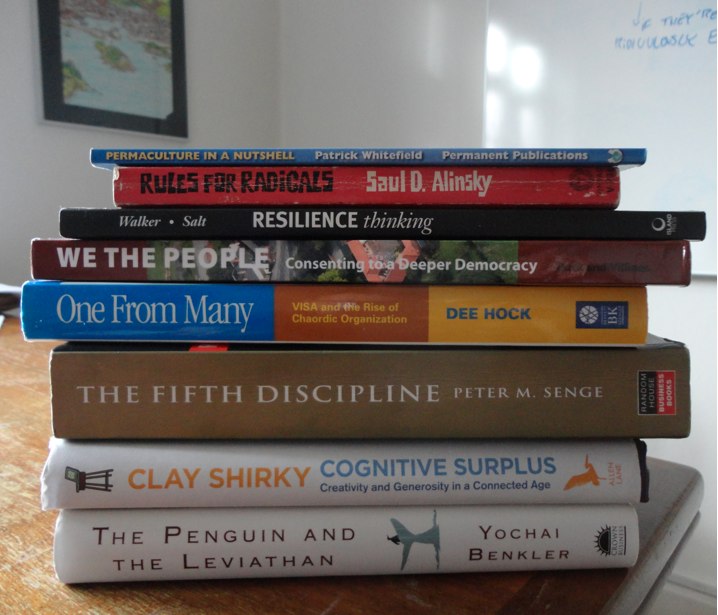 Chaordic organizations
“Chaordic” is a term coined by Dee Hock, the founder of VISA International, to describe organizations that exist at “the edge of chaos”, and thus combine chaos and order in a way similar to how life and complex adaptive systems work. Dee Hock has explores these ideas in the book One From Many, which also describes how the VISA corporation came to be and how it is inspired by these concepts.

Sociocracy
Sociocracy is mode of organisational governance developed by the Dutch educator Kees Boeke inspired by Quaker consensus decision-making processes. These ideas were further developed by Boeke’s student Gerald Endenburg who combined them with systems thinking in the electrical engineering company he took over from his parents in the 1970s. The book We The People by John Buck and Sharon Villines gives a good overview of the basics of sociocratic organisation.

Learning organisations
Learning organisations is often attributed to management researcher Peter Senge, whose book The Fifth Discipline uses systems thinking to integrate individual, team and organisational learning. The core point being that an organisation is never static, but must continually develop and learn in order to respond to external pressures.

Communities of Practice
A term coined by educational theorists Etienne Wenger and Jean Lave, a Community of Practice is a group of people who share a craft and/or a profession and use that group to share information and experiences to develop personally and communally. I used this theoretical framework a fair bit in my Master’s Thesis on the Ubuntu Linux community.

Cooperative Systems Design
Cooperative systems design is new term invented by Harvard law professor Yochai Benkler in his book The Penguin and the Leviathan. He describes it as “a new area of research at the intersection of experimental economics, organizational sociology, political science, and evolutionary biology.”

Viable Systems
The Viable Systems Model (VSM) was developed by the british systems thinker Stafford Beer in the 1970s. A viable system is any system organised in such a way as to meet the demands of surviving in the changing environment. An accessible introduction to the VSM is available here.

Resilient organizations
“Resilience” is the new, hot term following “sustainability”. The group of ecologists and systems thinkers that collaborate through the Resilience Alliance defines resilience as “the capacity of an ecosystem to tolerate disturbance without collapsing into a qualitatively different state that is controlled by a different set of processes”. They apply this notion to organisations in their book Resilience Thinking.

Living companies
Life-long Royal Shell employee Arie De Geus explored what makes businesses thrive in the long term in his book The Living Company. The core notion being that you should perceive the company as a living, learning being that is intimately connected to and dependent on the surrounding environment.

Community Organizing
“Organizing” is the oft-used shorthand for the community organizing model developed by Saul Alinsky and described in his book Rules For Radicals. It has been an effective tool in political organizing for elections, labour struggles and in local communities since the 1930s. It has since been expanded by Marshall Ganz.

The Cynefin framework
Cynefin (pronounced Ky-nev-in) is a Welsh word meaning something like “a habitat that influences us in more ways than we can understand”. It is used to describe a decision making framework developed by management thinker Dave Snowden. Building on the notion that organizations as Complex Adaptive Systems, Cynefin provides a framework to help leaders understand the nature of a given situation (simple, complicated, complex or chaotic) and how best to make decisions under those circumstances. A good introduction to Cynefin can be found in this Harvard Business Review article.

Organizing without organizations
“Organizing without organizations” is the tagline from internet theorist Clay Shirky‘s book Here Comes Everybody. In it he describes how the Internet is challenging the way organisations work simply by allowing for what Shirky calls “ridiculously easy group-forming”. Now that any web page is a potentially community, the transaction costs of bringing together a group of people have plummeted. Shirky is a good source for exploring the consequences of that change.

That’s my list so far. I’m sure there’s a lot more interesting perspectives out there in this field. So if you know of any, please share them in the comments below.

4 thoughts on “Inspiration for an organisational permaculture”