Some time ago, I wrote about how I ditched my smartphone and returned to an old Nokia “dumbphone”, started a tight Inbox Zero regime, and began checking my email just once a day. All in an attempt to regain control of my digital life.

The problem is that smartphone is such an incredibly powerful and sophisticated tool, and that we don’t seem to be able to selectively use just some of the functions it offers. If we can check our email and Facebook on it, we will do so. It’s awfully hard not to, because we quickly become accustomed to that little dopamine kick that such news offer us.

The solution, of course, is to develop filters that limit the stress and distraction of such unwarranted information flows. And in that regard, ditching your smartphone is perhaps the most extreme filter short of leaving the Internet altogether.

I’ve had lots of positive responses from people who have been inspired by my approach. But very few people have been willing to take the drastic step of giving up their smartphones. There are simply too many neat features that they’ve come to love and take for granted: The touchscreen, the seamless calendar integration, GPS and maps, the high quality camera, and so on.

So, that raises the question: How can we construct distraction filters on the smartphone itself?

There are already a slew of such distraction filters available for the desktop — like Freedom, which severs your internet connection for a set amount of time, or SelfControl, which allows you to block a certain set of websites for a set amount of time. But as far as I can see, the only thing similar to smartphones is a pretty half-assed app called Self Control for Study available for Android phones.

Right now, we have dumbphones and we have smartphones. But as tech writer John Pavlus notes, the killer app for smartphones would be to make them able to emulate dumbphones.

So, what we need is a third kind of phone. One which combines the simplicity and lack of distraction of the dumb phone with the power and grace of the smartphone. 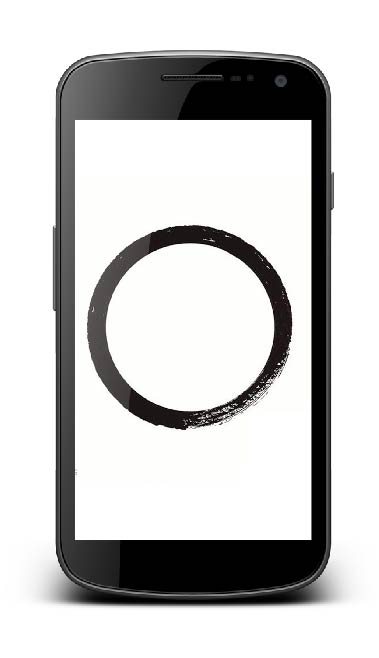 The zenphone is the smartphone simplified. It is the effortless smartphone, which gives you all the tools you need without distracting you from the tasks at hand.

Technically, it is an android launcher similar to the Home launcher that Facebook released recently.

A launcher is the software that presents the home screen of the smartphone and is responsible for starting other apps and widgets. In practice, it’s just a overlay on top of the smartphone’s own operating system, designed to emphasise or de-emphasise certain features. For instance, the Facebook Home launcher is designed to be a drop-in replacement for the existing home screen on an Android device that turns the whole phone into a big Facebook app.

The zenphone launcher pretty much uses the same technology to do exactly the opposite: It filters the apps and functions available on the phone to a chosen minimum, thus limiting the ways you can use the phone to free your mind to focus on what’s important.

Installing and un-installing a Android launcher is easy: It’s just a matter of installing it from the Google Play store, and then rebooting the device to use the new launcher. So, if you need access to one of the filtered apps, it’s just a matter of rebooting your phone. But the point is that the hassle of rebooting means you’re less likely to bother, and thus less likely to be distracted. In short, the zen phone adds a little extra friction that you need to overcome if you want to distract yourself. And just that little bit extra will often be enough.

The beauty of it is that you decide for yourself which apps, widgets and websites that you don’t want to be able to access on the zenphone. It is not an extreme either/or solution. It can be tailored to fit your needs.

Now, I haven’t actually built this launcher. Right now it’s just a concept and an illustration.

I’d love to do more with this, but I don’t have an Android device nor the skills necessary to adapt one of the many open source Android launchers to build a zenphone launcher. So, instead I’ve written this blog post. In the terminology of the Cult of Done, this is a “ghost of done.”

But if there’s anybody out there who’d be interested in making something like this, please get in touch.

2 thoughts on “Distraction filters on the smartphone”