Today, I came across an interesting blog post by Dave Snowden who apparently is something of an expert when it comes knowledge management (whatever that is).

Snowden writes about the dangers of rose tinting — that is trying to map out a route to some ideal future instead of working in the present and relating to the real problems at hand.

His point being that idealists tend to be unable to embrace dissent and learn from it, and so they seek and encourage confirmation rather than conflict. That means that when a group of idealistic, like-minded people get together, it can easily devolve into a sort of Monty Python’s “Four Yorkshiremen” sketch in reverse, where they encourage each other to develop bigger and bigger utopian fantasies that can encompass all needs and suggestions and thus avoid any dissent. 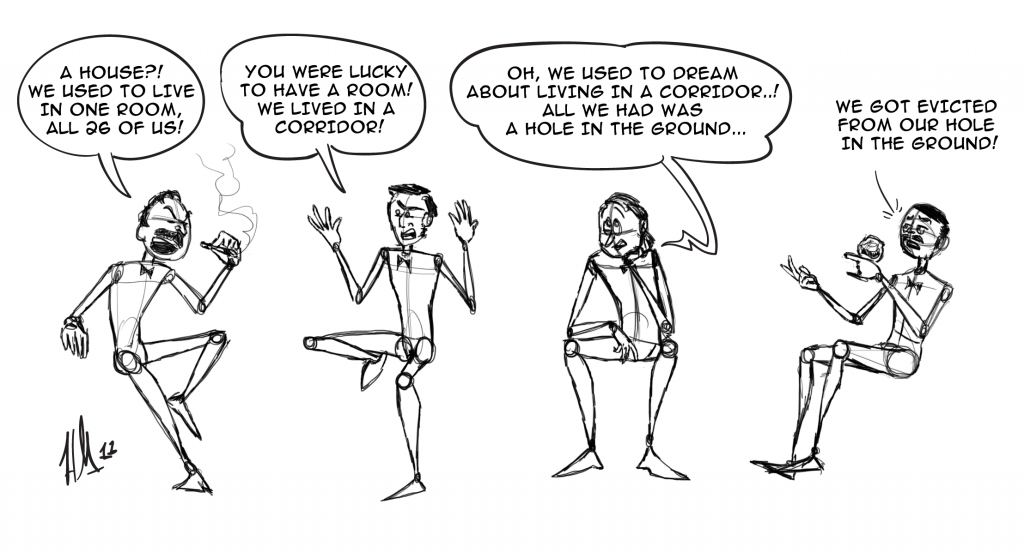 Drawing of the four Yorkshiremen found on Wowox.com

I’ll be the first to admit to having a utopian bent, so for me this is a welcome warning. I do try to be realistic about the scope of what I’m doing. I find the mental image of “Four Yorkshiremen In Reverse” to be a rather powerful reminder of the danger of such rose tinting.

Snowden goes on to say that you won’t change things by lecturing people on how old fashioned their thinking is. This is similar to Euan Semple’s credo that “to rescue someone is to oppress them.”

Instead of lecturing, Snowden suggests that you put people “into situations and give them tools where old ways of thinking are not sustainable and they have to act differently. If they work it out for themselves it’s sustainable.”

That is certainly something to ponder.